Italy’s sales remain positive in monopoly markets such as Sweden and Canada where wine sales are not overly dependent on restaurant consumption.

The UK regained some of its independence on Saturday, July 4, as bars and restaurants re-opened but how is it going in Italy? Italy eased out of Lockdown seven weeks ago and is now slowly counting the cost of the pandemic. The drop in restaurant turnover this year is €34 billion, and Italy’s wine tourism business worth €2.4 billion has been severely hit. Just as tourists start returning and many businesses put a brave face on proceedings, Italian food and wine expert Michèle Shah talks to producers in Lombardy, Tuscany, Sardinia, Veneto and Sicily to find out what the ‘new normal’ means to them.

From being the first European country to shut down at the start of the Covid-19 Pandemic in early March, Italy recently re-opened shops, hairdressers, bars, cafes and restaurants on 18 May, with the obligation of one-metre distancing and face masks to be worn inside premises. Today the daily rate of new cases is around 200 a day, with more than half of these originating from Italy’s Covid-hub, Lombardy.

Not everything and everyone is quite back to normal. Many businesses, especially linked to tourism, Italy’s prime industry, are still unsure if they will be re-opening or if they will make it through the summer season. Most are still trying to get to grips with the ‘new normal’, which is clearly different for everyone. Millennials and Z-generation seem less concerned with social distancing, crowding in bars, pizzerias and on beaches, while football fans of all ages, recently took to the streets and piazzas in Naples celebrating their team’s winning of Italy’s football 2020 league. 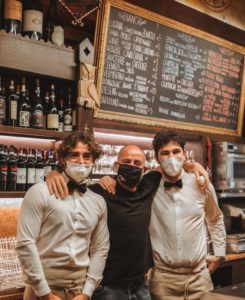 As European countries open their borders to each other, tourism and business are both expected to start improving in the coming weeks, though the picture is not as reassuring as one would wish. Looking at a recent report issued by Centro Studi di Fipe / Confcommercio (Italy’s main restaurant association) the average drop in turnover was -50%, (an estimated €34 billion) leaving most businesses struggling to return to the same level of business prior to the lockdown.

“The hotel business is slowly opening up for bookings in July and August as tourists, some from Germany are returning to Lake Garda, but here in the centre of Verona for now restaurants are only open in the evenings. In July they will also be open for lunch,” says Sabrina Tedeschi of the Tedeschi wine estate.

The famous historic Bottega del Vino, bar and restaurant in the centre of Verona, property of the Famiglie Storiche (a group of top Amarone-producing families) boasting an eclectic wine list of over 4000 labels has opened its doors to customers during the evenings. Its manager, Luca Nicolis says he feels things are getting back to normal. “The mood is festive and we feel positive and enthusiastic to kick off again to an even better start,” says Nicolis. “I think many older people are still reticent to go out and mingle.” According to Nicolis, for now most of Bottega del Vino’s customers are locals and a younger crowd who are eager to celebrate and trade up, drinking Champagne, Burgundy, and of course the local Amarone.

Tuscany is also seeing a drastic reduction in tourism. Donatella Cinelli Colombini of Brunello di Montalcino’s Casato Prime Donne estate and Fattoria del Colle in Trequanda, a beautiful rural B&B in the Sienese countryside, says she has lost about 16 wedding celebrations that would normally have taken place in her B&B with an extended stay of a week for the marriage party to enjoy the Tuscany scenery and hospitality. 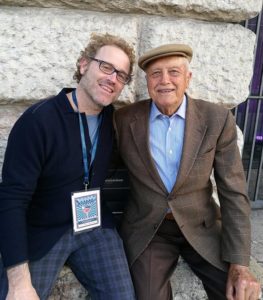 The loss of income from wine tourism is particularly hard felt by the thousands of small wineries dotted all over Italy, many of which depend on cellar door direct wine sales. In a normal situation, Italy’s wine tourism is estimated to generate over €2.5 billion in turnover. Many, like Colombini, are seeking to stimulate interest by offering packages which include a variety of outdoor activities, like picnics among the vineyards, trekking, cycling tours, wine tasting and cooking classes, but none of these activities seem to bring back the number of tourists from abroad.

This current landscape has accelerated e-commerce in sales and digitalisation, generating a whole new offering of digital tastings and winery visits allowing the final consumer to interact with wine producers, estate owners and wine travel. According to Filippo Magnani, a professional Italian wine guide, many wine enthusiasts are finding professional digital platforms such as WineAround or WineTourism.com where they can buy into these experiences.

“In my opinion, we need to be aware of the strengths and weaknesses of these offerings. Online platforms can increase a winery’s customer base attracting not only wine enthusiasts, but also wine tourists, however it will never replace the experience of the human touch that the personal visit can offer,” says Filippo Magnani, CEO of The Italian Wine Insider, a professional wine guide.

Southern Italy had far fewer cases of Covid-19 and Sardegna possibly the fewest according to Daniela Pinna, of Tenute Olbios in Gallura, in the north of Sardegna, famous for its crisp, Vermentino wines. “It almost seems as if it never happened,” says Pinna. “Flights and ferries are back in operation since 3 June and wine tourism is starting up again, though our exports during ‘lockdown’ suffered a -90% fall.” Pinna like many other small family-run wineries catering to horeca distribution rather than supermarket sales or e-commerce, suffered great losses in sales. 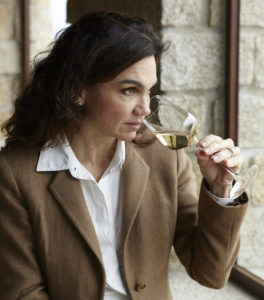 “Orders are beginning to trickle back in and even though we cannot recuperate our loss we are back in business which is the most important thing. Now is the time for the region of Sardegna to invest in promoting our wines and our territory,” says Pinna who is also president of Vermentino di Gallura DOCG, the consortium for Gallura Vermentino, emphasising that none of the consortium’s producers will send their Vermentino di Gallura DOCG (even if it entailed downgrading it to table wine) to distillation and none will cut back on yields. Pinna’s consortium has requested that the funds destined for distillation and green harvest be re-destined to the promotion of Sardinian wines.

Distillation has been widely discussed over the past months in all regions of Italy, and the government has just announced a funding of €50 million, financed by EU, to be made available for wine producers for the distillation of generic wines. The aim is to reduce the build-up of stocks that are likely to remain in the cellar, due to the impact of Covid and now destined to the production ethyl alcohol and disinfectants. According to Italy’s minister of agriculture such action is a necessary, but a voluntary one, to avoid overproduction that could affect price points and safeguard the quality image of Italian wines of excellence, closely connected with the ‘Made in Italy’ branding.

According to Denis Pantini, Head of Nomisma Agrifood Monitor, it’s still too early to paint the exact picture of Italy’s exports for the first quarter of 2020, which registered an increase of 5% (in value) compared to the same period in 2019. A growth driven by an extremely positive first two months of 2020. Italy’s sales remain positive in monopoly markets such as Sweden and Canada where wine sales are not overly dependent on restaurant consumption. While for April, according to Nomisma, 2020 Italy sees a fall in wine sales in the UK of -17% in value alone. 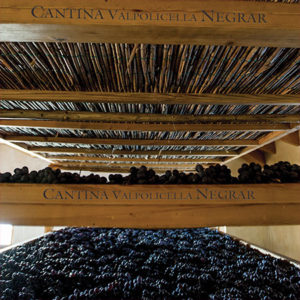 “Exports to Denmark, Norway, Russia and Germany suffered more than other countries,” says Daniele Accordini, Director of Cantina Valpolicella Negrar, Veneto’s top Valpolicella cooperative with exports to 40 countries. “I don’t want to be pessimistic but I think we are by no means out of this yet, not until a vaccine is found, the danger of Covid-19 will stay with us.”

According to Accordini, people continue to drink more at home and in many cases trade-up. Cantina Negrar has differentiated its sales between direct cellar door sales, Italian horeca, Italian large-scale distribution, e-commerce, monopolies and importers. For the upcoming harvest Cantina Negrar will be reducing yields in production from 12 tons/hectare to 10 tons/hectare for the more common grape, but not for the production of Amarone or a higher-level production.”

Finally, the weather in Italy has been very unstable over the month of June, with heavy downfalls and hail storms in Veneto, causing some vineyards to be hit more severely than others. Piemonte and Tuscany also had their share of hailstorms and days of torrential rain, with the risk of compromising this year’s harvest.

Fortunately, the sun always shines on Sicily and the Planeta winery has finally re-opened its Foresteria di Planeta – 14 room winery accommodation and restaurant located in Menfi, situated within a centuries-old pine forest, with its own private gardens, private beach and restaurant combining nature with the style and comfort.  “The bookings are coming in and the phone rings just like before! We stay positive, ” says Francesca Planeta.