Biondi Santi, the evolution of a wine legend.

The 8th of July,  I was delightfully invited to visit the estate of the renowned Brunello producer, Biondi Santi, and I had the pleasure to taste their wines. It has been a great honor for me to be back in the place where the cult wine Brunello di Montalcino has been created. In the real beginning of my career, in 1999, I met the legendary Franco Biondi Santi in front of the 18th century villa Tenuta Greppo. It is still a significant point of reference for my entire working and personal life in the world of wine. 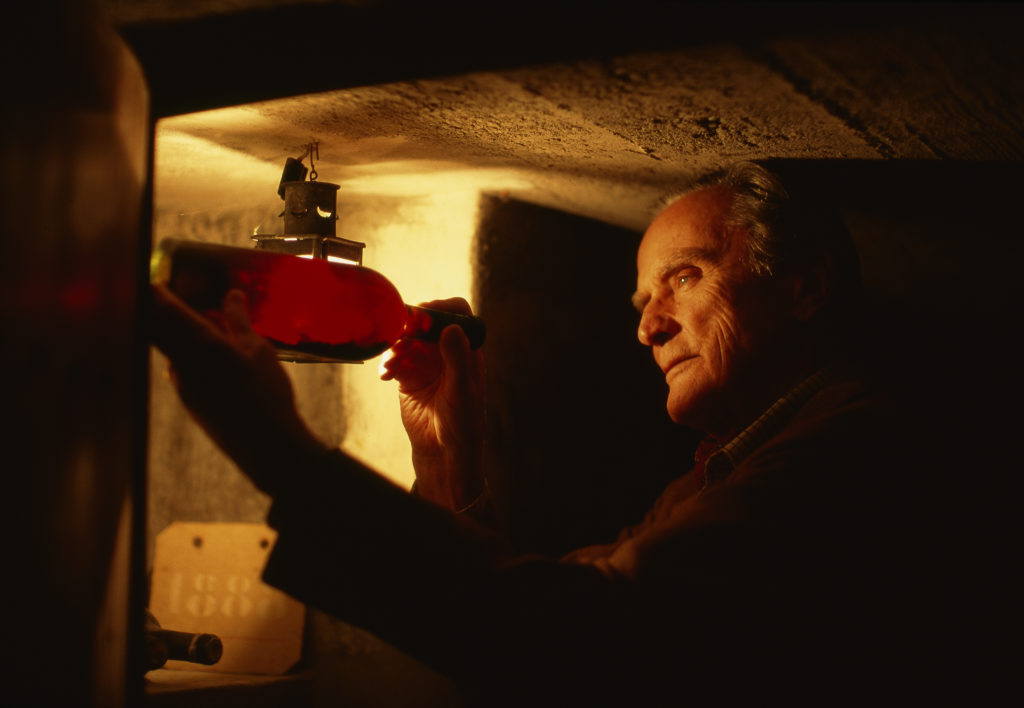 At that time, I was a young boy with a drawer full of dreams. I was welcomed at the beautiful entrance of the estate by a tall gentleman. Mr Franco Biondi Santi was in front of me and I immediately perceived his intense humanity and kindness. He was for me a passionate teacher, elegant and enthusiastic. A charismatic man. After a few years, I am back there with my team. We have been welcomed by Sabine Cappelli (hospitality) and Lene Lundvald Bucelli (marketing and communications) who majestically guided us in to the discovery of the innovations of the estate, always transmitting the same humanity and kindness that has always distinguished the Biondi-Santi family.

An endless success of a great vision of men 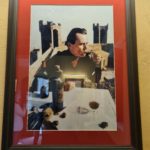 There is an indissoluble thread between the success of one of the most important wine territories in the world such as Brunello di Montalcino and the history of the Biondi Santi family. The line of a dynasty of brilliant men; charismatic and visionary figures who have always been able to look forward. Masters of winemaking that managed to keep up the family name and their traditions. They’ve always taken care of their beloved territory of Montalcino. It was first the revolutionary intuition of Clemente Santi that in the 1850 decided to plant the Sangiovese variety at Montalcino. The name Biondi Santi comes from the will of his grandson Ferruccio, son of Caterina Santi (Clemente’s daughter) and Jacopo Biondi, to keep the grandfather name. Clemente and Ferruccio shared the same love for viticulture and vinification. The name Brunello di Montalcino (with capital B) on the label was first seen in 1888 under the guidance of the latter. Ferruccio Biondi Santi also noticed the robust character of the Sangiovese Grosso grape and decided to vinify it on its own to produce a wine suitable for ageing.

Another turning point was in 1966 when Tancredi (Ferruccio’s son) established the specification when the DOC was created for the Brunello di Montalcino (then upgraded Docg in 1980). The other brilliant visionary of the last century was Franco Biondi Santi  (1922-2013) who learned from his ancestors the fine art of vinifica tion. As a wine producer he meticulously continued the growing practices and further enhanced the already cult wine of Montalcino. He carried on the study begun by Ferruccio and continued by Tancredi on the research of a grape that was the most resistant to the cryptogams that were affecting their vines. The selection process concluded with the identification of the clone known as BBS11: the name standing for Brunello Biondi Santi with the 11 corresponding to the chosen mother plant. Biondi Santi is the only producer to have given its name to a grape clone. 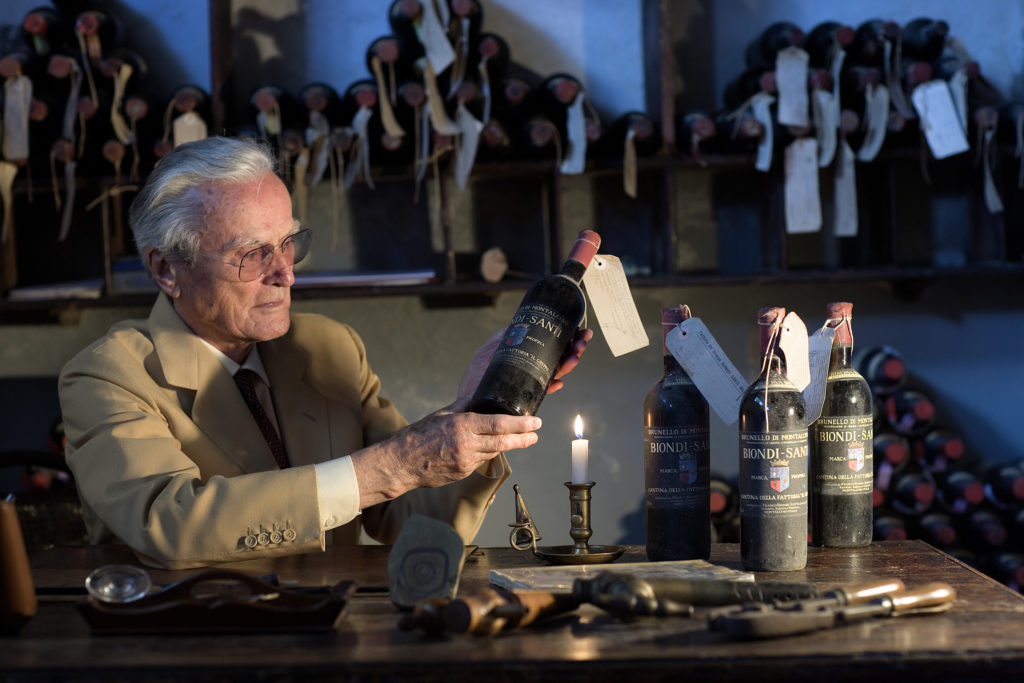 After many years and long tradition in the the wine production, the new generations of the family, Jacopo Biondi Santi and his son Tancredi Biondi Santi initiated a major change and evolution for Tenuta Greppo, welcoming a new partner in the leading of the estate to be able to continue the enduring commitment of producing outstanding wines. Today the winery is under the guidance of Christopher Descours, proprietor of the EPI Group , who leads hand in hand with an extremely qualified Italian team. An important strategic alliance driven by the great respect for the bicentenary know-how in the vine growing and by the common goal of reaffirming once again Biondi-Santi among the most special and desired wines in the world. The vision of the new partner was endorsed immediately by Giampiero Bertolini who was appointed as CEO in November 2018 standing at the helm of the historic winery today. 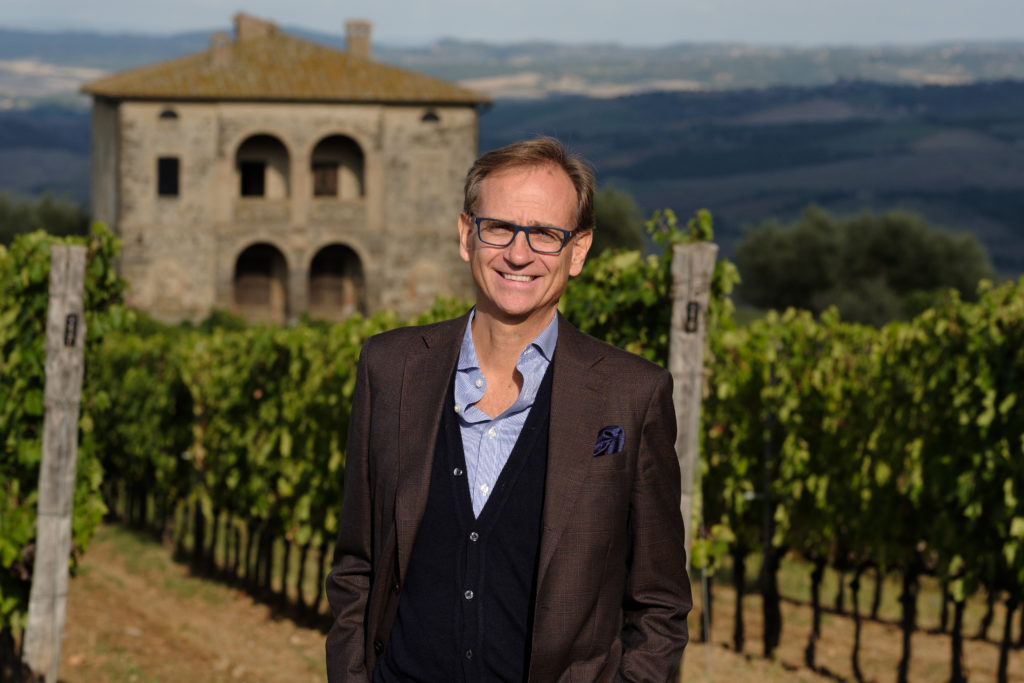 Since 2018, huge investments have been made. The new partnership carried on the scientific research of Franco, who introduced a rigorous study on the parcellation both in the vineyards and in the winery depending on the age of the vines.  It shows the extraordinary effort of the leaders of the estates to try to understand and develop their beloved terroir. An accurate examination in the professional hands of the agronomist Pietro Parra  that starts from the analysis of the vineyards, to take a fresh approach to the terroir. He has been able to fully map the characteristics of all the different types of soil and exposition. The estate today counts 47 hectares in total. All the grapes are from different vineyards that extend between the four historical sites Tenuta Greppo, I Pieri, Scarnacuoia, Pievecchia and the new acquisition Ribusuoli.

“Tenuta Greppo”, is the main block around the winery, 560 metres above sea level. It is situated on a 26-hectare, coming from a massal selection of the oldest vines at the property dated back 1930, the majority of them are BBS 11 clones  (Brunello Biondi Santi 11).

“I Pieri”, east of Montalcino, sitting at 370 metres altitude with a cool east-facing exposure, like Greppo is poor, calcareous soils with a high marl content.

“The Scarnacuoia”, on the west of the village Montalcino, at 450 metres altitude with old terraced vineyards separated by dry stone walls.

“Pievecchia”, the lowest lying site, at 200 metres altitude with a cool, airy, north facing exposure. Here the soil has a higher clay content.

“Ribusuoli”, is a plot acquired at the end of 2019 at an altitude of 380-450 metres, not far from Tenuta Greppo, with very similar soils and exposures.

Biondi-Santi is committed to the respect of the environment and safeguarding biodiversity. Today, as in the past, the vineyards are not treated with any invasive chemical agents.

The winery and wines.

New concrete and oak vats were purchased to maintain the winery’s tradition of the use of concrete for fermentation and Slavonian oak for ageing. The grapes are destemmed and crushed upon arrival at the winery. Only indigenous yeasts are used for fermentation of the riserva. The process takes place in oak vats, unlike the regular Brunello, which ferments in concrete vats. Federico Radi, the technical Director in charge of the wine production, is focused on continuing the balance between tradition and innovation. Biondi-Santi produces three wines, all crafted with Sangiovese Grosso: Rosso di Montalcino; Brunello di Montalcino; and Brunello di Montalcino Riserva. All three wines are bound together by a distinctive style, driven by a signature freshness, which makes them vibrant, and a specific balance which makes them elegant and very suitable for long ageing in the bottle.

My tasting at Biondi-Santi, Tenuta Greppo  on the 8th of July 2021 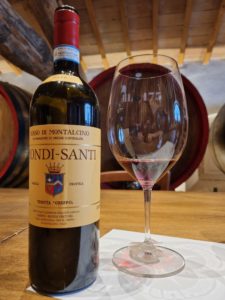 The Rosso di Montalcino 2018 was produced exclusively from Biondi Santi proprietary vineyards and aged in Slavonian oak barrels for 12 months.and released on the market after 3 years from the harvest. 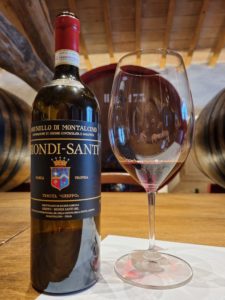 The 2015 Brunello was produced exclusively with a selection of grapes from Biondi Santi proprietary vineyards, then aged in Slavonian oak barrels for 3 years and released on the market after 6 years from the harvest.For the first time in history Biondi-Santi produced this wine in 750 ml and Magnum bottles.

Bright deep ruby core with narrow rim. The wine expresses intense aromas of black cherry and plum mixed with scents of chocolate and fresh tobacco. The palate is balanced, the acidity matches perfectly with the soft tannins and with the alcohol. 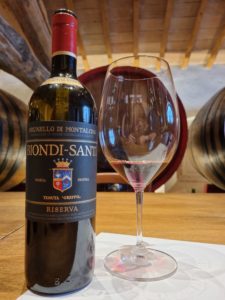 The 2013 Riserva was produced exclusively with a selection of grapes from Biondi Santi proprietary vineyards comprising oldest parcels, then aged in Slavonian oak barrels for 3 years and released on the market after 7 years from the harvest.

Vintage 2013 is officially the 40th Riserva produced from 1888 until 2013. For the first time in history Biondi-Santi produced three large formats in addition to the 750 ml bottle: Magnum, Jéroboam and Mathusalem. 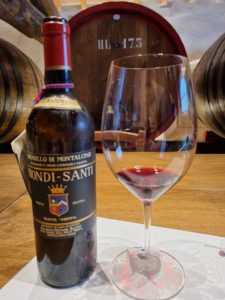 The 1983 Riserva was produced with the Biondi Santi proprietary clone of Sangiovese Grosso called BBS11 (Brunello Biondi Santi 11), which was identified and selected by Biondi-Santi at Tenuta Greppo in the Seventies. For this wine were used only grapes from the oldest vines with over 25 years of age, then it  was aged in Slavonian oak barrels for 3 years and released on the market generally after 7 years from the harvest. It benefited from a long refinement in the bottle in the quiet and darkness of “La Storica”, the bottle library at Tenuta Greppo where all the historic vintages of Biondi-Santi Riserva are scrupulously kept.

Clear, garnet colour with paler tinge. The nose shows a magnificent bouquet with scents of prune and fig with hints of mushroom and tobacco. Delicate entrance in the palate with medium body and silky tannins. It shows equilibrium and finesse. A gorgeous wine, showing the purity and the potential of one the greatest Sangiovese in the world. 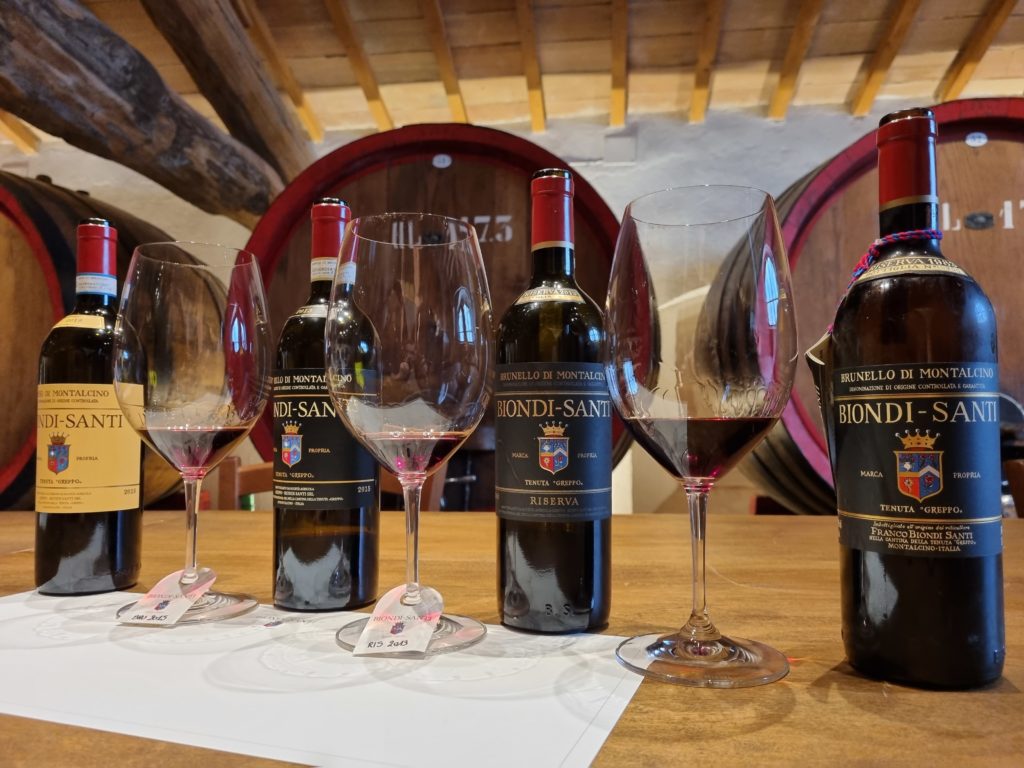 Tenuta Greppo and its terroir are a place of perpetual balance. Each bottle produced is unique and alive, growing without hurry in its charming relationship with time. It is a wine that maintains not only the great quality that has always distinguished the company, but it also assumes unique features year by year. Prolonged bottle-ageing is then essential to allow the Biondi-Santi style to develop to its fullest. Longevity is in fact the most precious quality of these wines. It is intriguing to think that in a sip of their Brunello di Montalcino there are hidden all of the three temporal dimensions: the past with the history of a family and their dedication to viticulture, study and research; the present with lively, complex and intense flavors; and the future, that lies in the ability to grow in character, both its wines and its representatives. Here they’ve always seen beyond the horizon, setting ambitious objectives. Pioneers that created what is considered today the finest expression of the Tuscan wine style.

Biondi Santi is the spearhead of one world famous wine destination. Wine lovers and wine professionals arrive in Tuscany from all over the world for their exceptional wine travel experience. 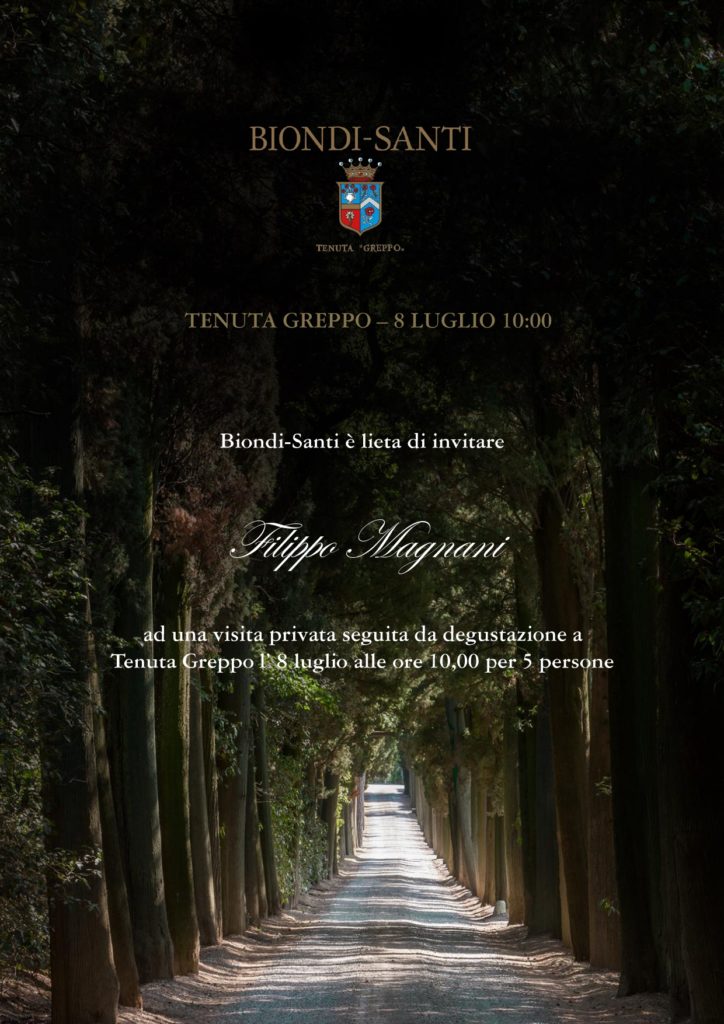 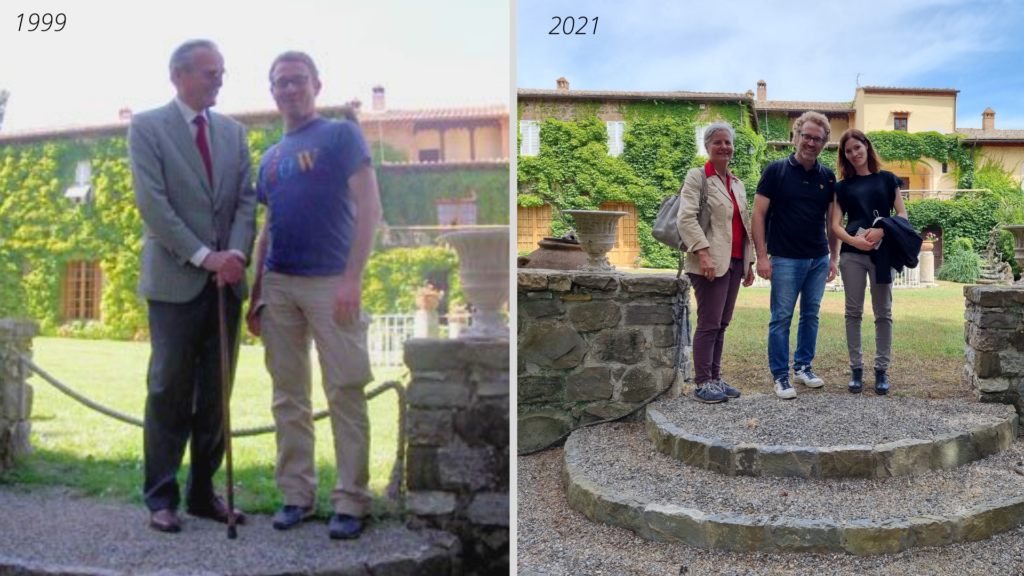 All my support to STILL I RISE, an independent organization offering education and protection to the world’s most vulnerable children. 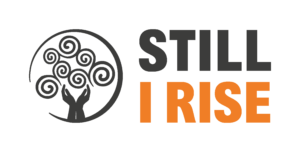