COLLIO, a small yet rich wine treasure in the northeast of Italy

Hidden in the Friuli-Venezia Giulia region, Collio is a gentle series of slopes where some of Italy’s best white wines are produced.  It is a small wine area within the province of Gorizia, near the Italian-Slovenia border. It was my great pleasure to be one of the fortunate writers, who participated in the press tour last November, majestically organized by the Consorzio Collio DOC.  Four days of intensive exploration and discovery, all dedicated to a protagonist of the Italian wine scene. I was thrilled and curious to dive into the tiny but rich world of this wine gem and my expectations were completely fulfilled. 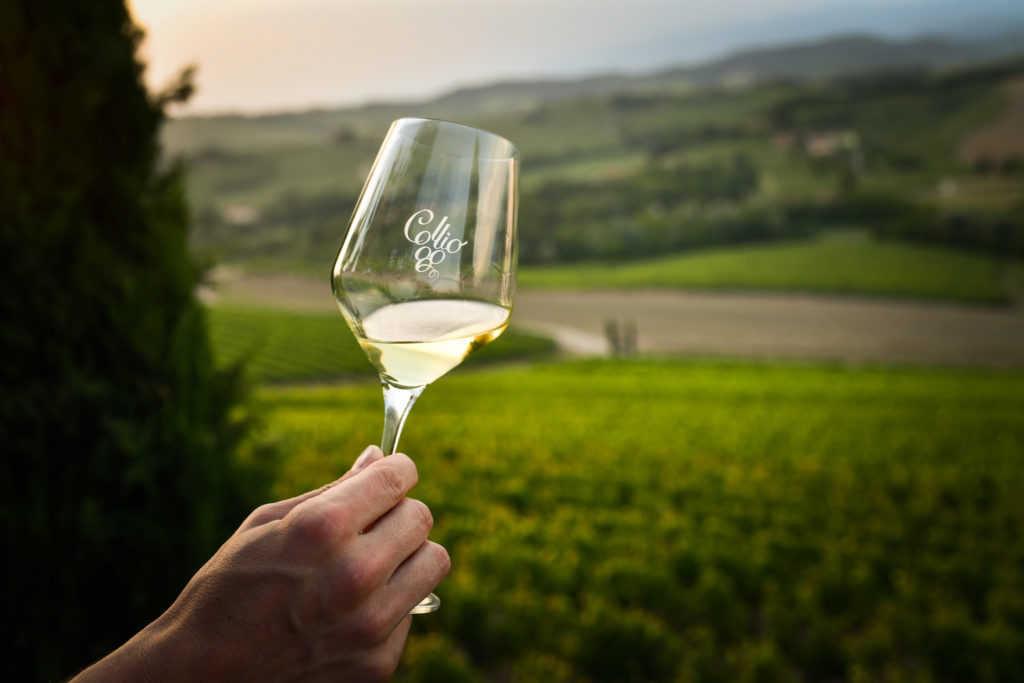 A small wine territory with surprisingly complexity and richness.

Collio is a bright place where prestigious wines have been produced since ancient times. Vineyards and wineries are spread over harmonious hills between 80 and 270 metres in height where, for over 2000 years, winemakers have found a special place for the production of a wide range of great wines in terms of style and grape variety. This ideal microclimate is generated by the presence of the Julian Alps to the north, which protect the valley by ensuring continuous ventilation from the “bora” that blows continuously over the vineyard. To the south, on the clearest days, you can admire the Adriatic Sea. The presence of the sea is fundamental for the health of the plants, the proximity to the Mediterranean (30 km away) gives the area milder seasons, warmer air currents and a dry climate. These factors combined with the many variable soil compositions allow each corner of this DOC to express itself with its own character and charm in the wine. The so-called “Collio Goriziano” wine area is half-moon shaped territory bordered to the West by the river Isonzo and to the East by the river Judrio. It brings together the same DOC wines from 1500 hectares of vineyards positioned in eight different municipalities: Capriva, Cormòns, Dolegna del Collio, Farra d’Isonzo, Gorizia, Mossa, San Floriano del Collio and San Lorenzo Isontino. 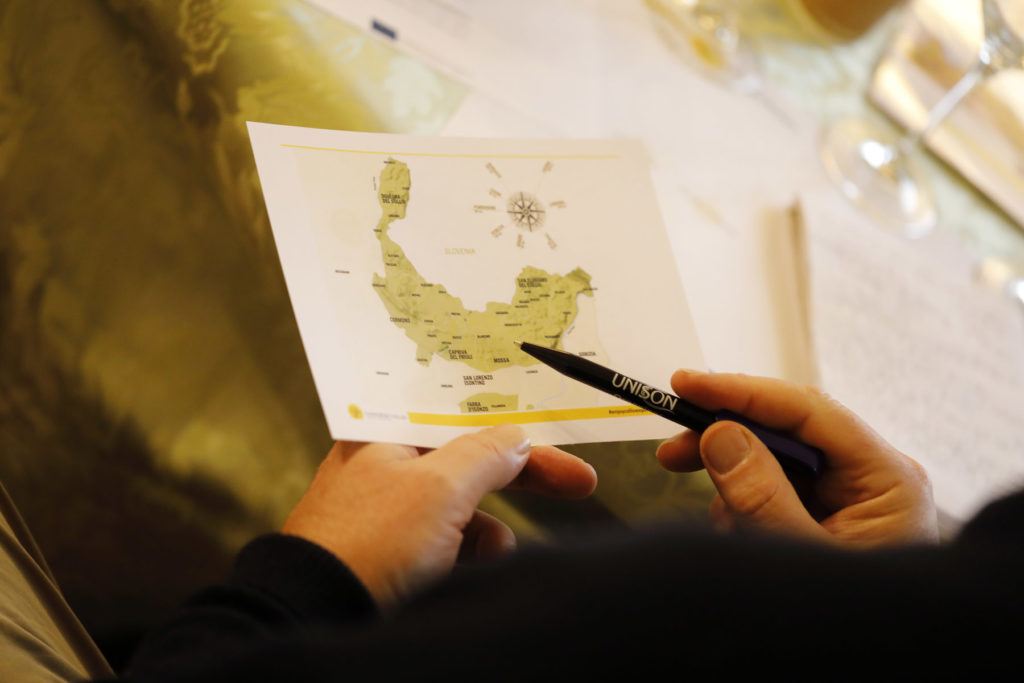 The Collio valley is home to about 200 producers who, with vision and great dedication, have succeeded in tracing a well-defined common path which is able to maintain a strong link with traditions, and to open in an enthusiastic way to developments and innovations. Not surprisingly, for decades now, the famous native varieties and pillars of this wine area, such as Fiuliano, Ribolla Gialla, Malvasia Istriana and Picolit, have been accompanied by international varieties due to the great versatility of the land for the production of elegant white wines. In particular, the Pinot Grigio finds an absolutely suitable place for its maturation here, with its characteristic straw yellow colour, its ash hints, structure and length. To complete the wide range of white international grape varieties cultivated in the DOC we find the Chardonnay, Sauvignon, Muller Thurgau, Traminer Aromatico, Pinot Bianco and Riesling. Despite the region of Collio being a well-known and renowned DOC for the production of a wide range of white wines, the surprising red wines also deserve to be mentioned. The trend is towards international grape varieties: Cabernet Sauvignon, Cabernet Franc, Merlot used predominantly for the most important vintages. The character of these wines very much reflects the territory in which we are: great drinkability, freshness, with an acidity that will allow these wines to express themselves at best in the battle with time. 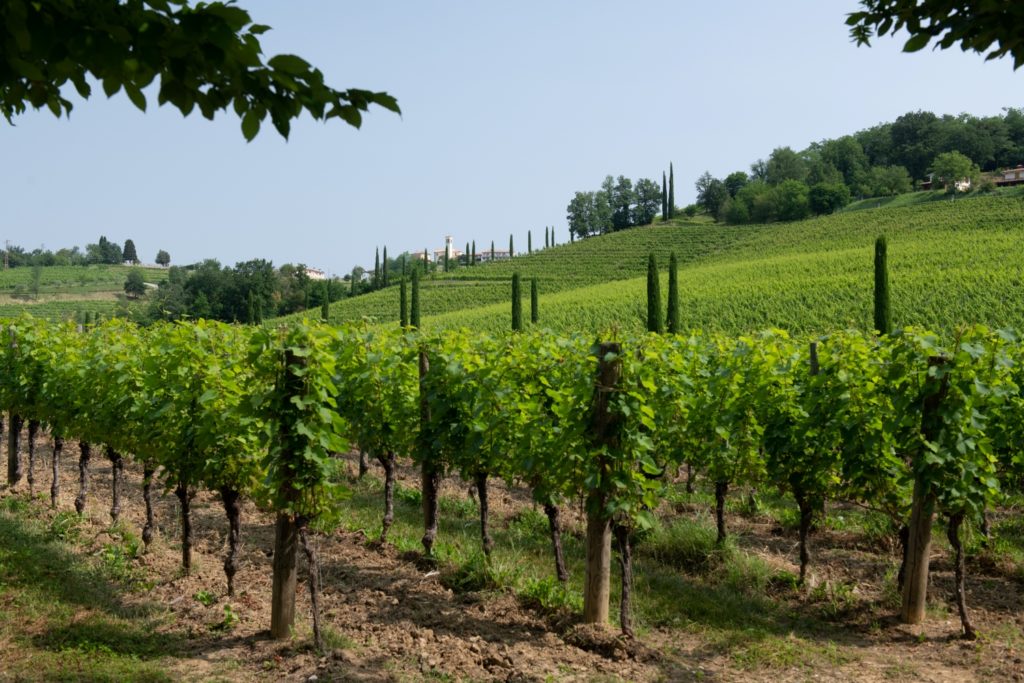 The “Ponca”, Collio’s soil signature for the production of elegant wines.

Taking a leap back 56 million years ago, the area of Collio was covered by sea, the land emerged only after 20 million years. The hills of Collio hide the characteristics of the marine environment in their depths. It is precisely the soil, called Ponca or flynch, that is a protagonist in the great character and complexity of the wines of this territory. This particular type of soil is composed of layers of marl and sandstone of Eocene origin. It is the “heart of the hills” that yields the characteristics of salinity and minerality of the wines from the Collio DOC. Furthermore, the composition of “Ponca” varies drastically in the different vineyards’ locations, giving an incredible array of wines, depending also on the type of the vine planted in it. It is therefore the hand of man that has to understand the land, shape it, and work it, to enhance the potential complexity and aging of the wines. 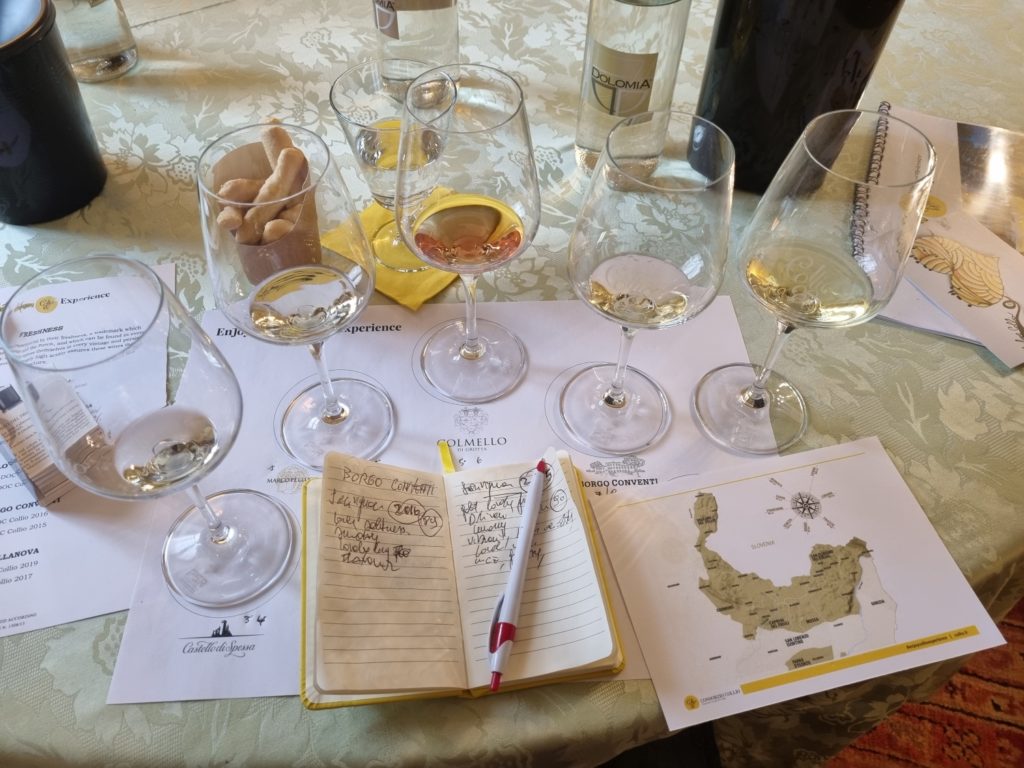 Four diverse subzones in the pursuit of excellence.

The wine region of Collio regroups a mix of grape varieties, soils and types of wine made by growers with strong personalities. During our trip we had the chance to appreciate the peculiarities and the differences between those four main wine areas, spread between the eight different municipalities:

Capriva is an area totally covered by vineyards that vest the hills around the wine estates. This subzone, in the northern tip of the province of Gorizia, is among the most beautiful views of the Collio. In the first morning of our trip, the consorzio had majestically organised the first tasting, covering the productions of different estates between Capriva del Friuli and Farra d’Isonzo. The producers who presented the wines were: Castello di Spessa, Russiz Superiore, Tenuta Villanova, Tenuta Borgo Conventi, Colmello di Grotta. All wines displayed intense and beautiful aromas in the nose. Furthermore, they all had lively acidity, maintaining great balance and a fresh finish.

In the central area of Collio, stands the town of Cormòns, surrounded by the hills that give life to the wine crus of Pradis, Plessiva, Brazzano and Zegla. Here, pleasant wines are made from Pinot Grigio, Malvasia Istriana and Sauvignon Blanc, and the well-known Friulano. It is a lower elevated area characterized by alluvial soils with a major presence of clay. During the afternoon of our first day, I had the pleasure to taste the wines of the following wineries: Tenuta Baroni del Mestri, Zorzon, Kurtin, Bolzicco, Carlo di Pradis, Bracco, Tenuta di Angoris. In general, they all expressed great texture with a good aromatic nose. They were vibrant and structured to the palate with a harmonious end.

The territory of Dolegna is the closest to the mountains. The vineyards are positioned at an elevation ranging between 50 and 90 metres. Here, the wind never stops blowing. The area is characterized by a cold and humid climate, particularly suitable for certain vines such as Sauvignon Blanc. The wine seminar with focus on Dolegna, on the second day, was very well organized and led by these estates: Tenuta Stella, Tenuta la Ponca, Fruscalzo, Pascolo, Casa delle Rose, Livon.  I found the wines well made, characterized by Intense flavours and aromaticity. Dry, fragrant palate with good acidity. Rich and elegant aftertaste.

Oslavia is considered the homeland of the orange wines. This wine corner is the cradle of visionary winemakers who represent first class pioneers of the production of skin-macerated white wines. Ribolla Gialla is the signature native grape variety of Oslavia’s wine identity. During the afternoon of the second day, I was lucky enough to sit side by side with the great interpreters in the Collio wine scene and all of them were able to reveal their individualism: Dario Princic, Fiegl, Gravner, Il Carpino, La Castellada, Primosic, Radikon. I tasted a wide range of great wines, showing high intensity and complexity of aromas. I tasted well balanced wines with body and finesse, signs of great potential for aging.

From San Floriano you can see the entire Collio region. It is the highest subzone. The hamlets of San Floriano are the easternmost territories of the DOC and they receive the benefits of dry and milder winds from the Adriatic Sea. The microclimatic conditions allow slow ripening, and the wines gain characteristics that well communicate their aging potential. Here we had the final dinner of the trip with a great tasting of San Floriano’s wine representatives. The wine growers which presented their wines were: Korsic, Marcuzzi, Manià, Humar, Formentini, Gradis’ciutta. The wines in general were vibrant, with good fruit and crispy acidity. They had a common elegance and good persistence. All lovely long-lasting wines. 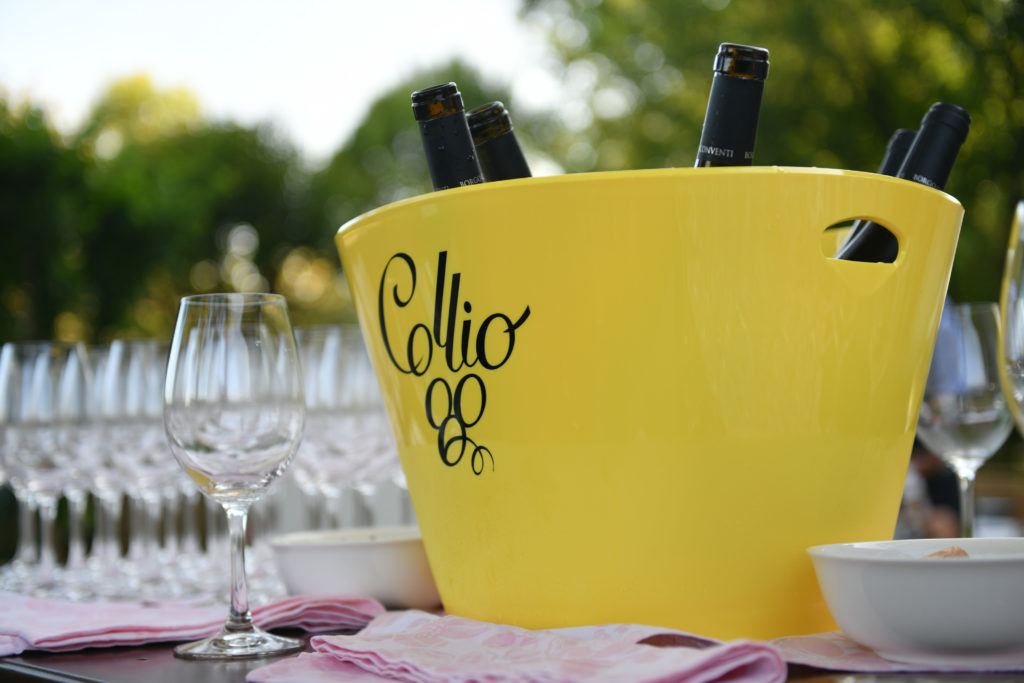 Collio wine destination, beyond the wine.

Collio is an astonishing spot, tucked away with wine themed castles and hamlets like Ruttars, Spessa, GradisCiutta, Oslavia and picturesque villages like Dolegna del Collio, Capriva del Friuli, Cormons, Farra d’Isonzo and San Floriano del Collio, all bordering one another. A particular destination for wine connoisseurs and oenophiles who love to discover the secrets behind the scenes of some of northern Italy’s finest micro-wineries. The roads and knowledge of wine tourism seem to end on the imaginary line drawn by Venice, but this land preserves a bountiful cradle of Italian culture and Northern European subcultures due to the proximity with Austria and Slovenia. It’s a fascinating place.

Around the town of Gorizia, a city designated as European Capital of Cosmopolitan Culture for the year 2025 by the European Commission, there are wineries with distinctive souls. It brings together great visionary producers, family and independent productions, modern and traditional wineries, revolutionary winemakers, who have made this territory one of the richest and most precious nests of white wines in Italy.

Along with the increasing success of the wine production, this strip of land has developed a great attitude towards reception and hospitality. The services related to hospitality are various and the experiences are many, you can choose to stay in a cosy B&B or in one of the charming country farms, or a hotel with luxury facilities. It is a perfect destination both for visitors that want to deep themselves in the authentic local culture, and also for those looking for a wild adventure.

Even the local Mittel European cuisine shows how the territory has been enriched by the different coexisting cultures. It is the meeting place of Hungarian and Austrian dishes with traditional Italian style. It is an extremely refined and elegant cuisine, which combines wild game with wines of incredible character and complexity.

To give a general overview of the territory and to better understand the wine region of Collio, the Consortium in collaboration with the Italian Sommelier Association, created “Enjoy Collio”. It is an event held in the autumn, addressed to international professionals and journalists and it is a unique opportunity to dig deeper into the immense and sometimes dispersive wine landscape of Friuli, tasting wines of exceptional craft but also combining experiences in authentic locations. The event brings together many facets of the territory, starting from the food and wine up to the hospitality, open air and sport activities. Enjoy Collio aims to show the thriving potential of the Collio region. The road has been traced, and this represents the first great steps of a territory that is and will become more and more a great pride for the Italian wine and tourism scene. 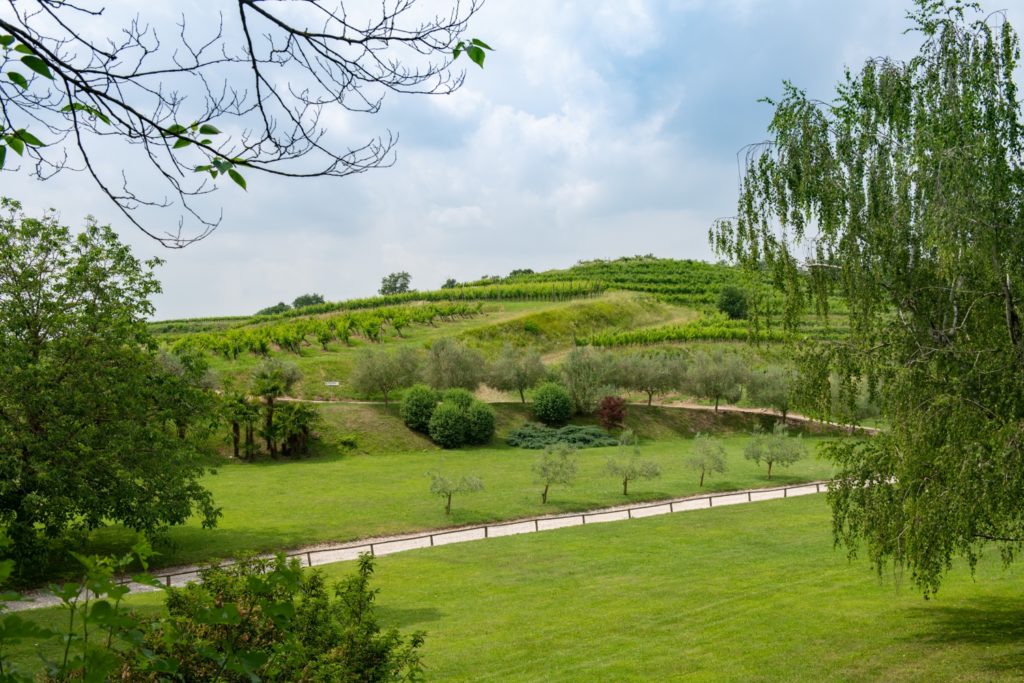