Eisacktal Wein, an example of farsightedness for territorial support – article by Alessandra Piubello

Twenty wine producers in the Isarco Valley have joined the EisacktalWein association, together with hospitality, catering and promotional facilities, so that enthusiasts can savour this unique territory. 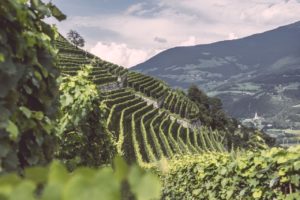 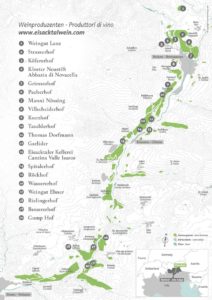 A variety of landscapes, morphologies, micro-climates, and altitudes: a jigsaw puzzle just waiting to be completed. A valley pass, a narrow canyon with steep sides that widens slightly in the Bressanone basin to then return to rugged Alpine scenery until it reaches Austria. A border region between north and south, between Middle-European and Mediterranean tradition. Cut through for centuries by the Isarco river, which springs at an altitude of almost two thousand metres near the Brenner Pass and unwinds for ninety-six kilometres to flow into the Adige just south of Bolzano.

The original Isarco Valley/Eisacktal district was formed in 1968 as a voluntary union of nineteen municipalities in the mid-high part of the valley. Twenty producers, through friendship, respect and mutual vision, have joined the EisacktalWein association (founded in 2015) together with hospitality, catering and promotional facilities. The aim is to continue to enhance the genius loci and put the mountain into a glass. The wine-production area is the most northern in Italy with 400 hectares of vineyards forged from the purity of the glaciers, the heat of their volcanic origin (porphyries in the southern part) and rocks created by magma (phyllites and diorites in the north). The natural landscape is spectacular, vineyards clinging to the mountains, heroic viticulture (with slopes that reach sixty per cent, and even one hundred per cent in some cases), in extremely small plots.  The lonely and wild beauty, unspoiled over time, leaves you speechless.

And what variety of morphology, landscape and brightness. Of altitude, ranging from 300 to 970 metres. Of micro-climates and night-day temperature differences. The recurring theme is the hand of man, the sweat and hard work put into terracing the vineyards with low, natural stone walls, gestures handed down from father to son. Here, complexity and uniqueness are not merely words found in brochures.

An eclectic valley, versatile, able to plant its own roots and take flight. Again. Yes, because in the past, red grapes, that were not suited to the territory, were cultivated here. And yet, the vine-growing tradition dates back to the fifth century and was continued by monks, evident proof of which can be found at Novacella Abbey, where wine has been produced since 1142. At the end of the 19th century (at long last), the territory’s vocation for white grapes was finally understood, but between the two wars and the progressive abandonment of the farmsteads, grapes were only cultivated for family needs. The pride of keeping up the tradition, however, was still very much alive.

In the Sixties, the cooperative winery in Chiusa re-launched the wine-making business alongside the bright beacon that had always guided from on high, the historical abbey and reference point. 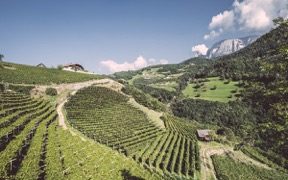 In 1975, the Alto Adige Doc denomination was created within the Isarco Valley sub-zone. The flame of freedom smouldered beneath so that, bit by bit, liberation began. The Huber family (Pacherhof) started the ball rolling, then, step by step, more and more producers began to bottle their own wines. The Nineties marked the real viticulturist revival with small, yet not tiny, wineries (the average number of hectares per company is one and a half). They each embarked on the road to independence, bearing gifts of authenticity, adherence to the territory and to their own existence. Stories of men and vineyards, each one different to the other. The wines, created by younger generations enjoy contemporaneity and go straight to the mark.

Of the two and a half million bottles produced (again in reference to EisacktalWein associates, which count 18 small producers and two larger organizations, namely the Cantina Sociale Valle Isarco and Novacella Abbey), the majority is drunk in Italy (75%).

Alessandra Piubello is the first female journalist to edit the Veronelli Guida Oro I Vini, the first wine guide to be published in Italy, created by the father of Italian food journalism. She is the only female editor in Italy’s wine guide world. Piubello is a renowned figure in the wine world due to her unbridled passion for wine which led her to become the editor-in- chief of numerous periodicals and the author of several books and reports on food tourism in Italy and abroad. It also ensured working with top national and international publications within the sector. About fifteen newspapers and magazines rely on her professionalism, including specialized foreign publications such as Decanter, Vitisphere, Sommelier India and, in Italy, Spirito diVino, Pambianco Wine&Food, WineNews, Bubble’s and many more. Multiple years of working as a taster for wine guides, such as the Guida Slow Wine and I Vini d’Italia de L’Espresso, have allowed her to further expand her skills (supported by constant study and courses, like AIS, WSET and at the University of Bordeaux). Her long pilgrimage among the tables of Italy has led her to become an inspector for the Guida Ristoranti d’Italia de L’Espresso.Since 2019, she has been teaching at the Luigi Veronelli Alta Scuola di Gastronomia. A member of prestigious journalist and wine associations as well as a constant presence on the panels of the world’s most renowned wine competitions, Piubello is the first and only Italian journalist in eighty-four years to be nominated Chevalier de la Confrérie des Chevaliers du Tastevin, the oldest wine institution in France. Piubello was also the only female Italian journalist invited to China for the “Asian Wine & Spirits The Silk Route – Conference and Competition”, a leading international show specifically for oriental wines.